I’ve had a weird, not so happy week to put it lightly. I got some new information on an event that happened almost four years ago, and it wasn’t favorable for those involved. I feel it’s not really my place to discuss what happened, especially over the internet.

Anyway, after several days of “Is this reality that I’m living in right now?”, I stumbled upon this Balenciaga x Crocs collaboration. Which means my whole week must’ve been a bad dream, right? Sadly, no.

I honestly thought these were a meme, since Balenciaga is known for making strange and confusing pieces, and Crocs are already a joke on the internet.  Like Louis Vuitton x Supreme, they’re surprisingly real, but I don’t think SoundCloud rappers will be as excited for these, buying knockoffs and whatever. 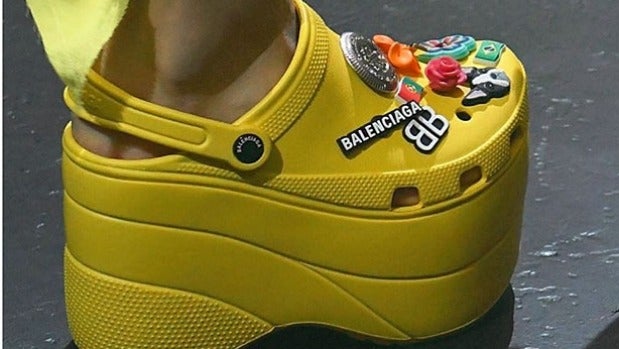 Here’s the thing, though: They’re already sold out. Not even the actual release, but the pre order. See why I thought this past week wasn’t real? I wish I had the money to buy these.

…Even then, I wouldn’t actually buy them.

This color is called “toast”, which is accurate since booze had to be involved somewhere in this collaboration.

My mom loves Crocs (God knows why), so when I showed these to her I expected some form of support. She hated them, but knew they were going for a high price. She guessed $500, and slowly lost her faith in humanity when I told her they were $850.

My dad, from the other room said “I don’t have much hope for the world.” He didn’t even say this when I told him people were eating Tide Pods for views.

Immediately after, he told me I have “investment broker taste with a Mc Donald’s employee paycheck.”

…That last one hurt.

Croc wedges aren’t a new thing, but 10 cm (about 4 in) platform heeled Crocs are.

Immediately, my mind went to the much overused, much quoted “What are thooooossseee?” Vine. No one could wear any kind of shoes, go barefoot, step into the band room my Junior year without being attacked by someone quoting this Vine.

And Vine was shut down for “not producing quality content”.

This isn’t a drag at runway shows and haute couture because those don’t always equal new products. Sometimes, only one item is made as an art piece or a show of talent. You can buy said piece off the runway if you’re rich enough, but it stays far, far away from regular people.

I’m just going to finish my weird, Jayden Smith Tweet-like week, and if asked to “walk a mile in someone else’s shoes”- I will gladly decline if they’re part of this collaboration.

Forgive me for being sentimental. I’m so glad you were born and that I’m living at the same time as you.